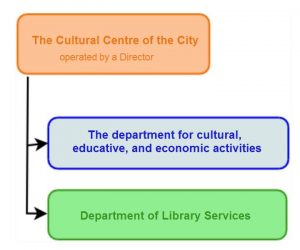 The Cultural Centre of the City (CCC) is an educational organization which strives to develop local culture while addressing the needs and interests of our citizens.

The CCC contributes to the general as well as specialized education of our citizens, advocates for amateur as well as professional artistic values, organizes film events, and fosters literary culture. It lends books and magazines, and provides informational services to our citizens.

The CCC also provides cultural entertainment and recreation for the community. By organizing local cultural celebrations, it creates awareness of the many historical and culturally significant events and figures of the region. Such activities also provide opportunities to participate in the commercial life of the city.

The CCC was established by decision of the city council in Hnúšťa on December 5th, 1991. On the basis of law number 9/91, which came into effect on January 1st, 1992,  the CCC became a designated cultural-educational organization within the city of Hnúšťa.

The headquarters of the CCC is in the House of Culture named after Ján Francisci Rimavský, at the address of ul. Rumunskej armády 195. The organization also refers to itself by the abbreviated title, CCC Hnúšťa.

By law, CCC Hnúšťa is a government-funded organisation, provided for by the City of Hnúšťa.

Funding and Governing – The CCC is a legal entity of the city, financially supported by government funding and supplemented through its own activities.

Organisational structure – The CCC is operated by a Director, who is appointed and retired by City council on the initiative of the mayor of the city.

The Cultural Centre of the City has two departments:

These departments work cooperatively in order to achieve their goals.

There are no upcoming events.